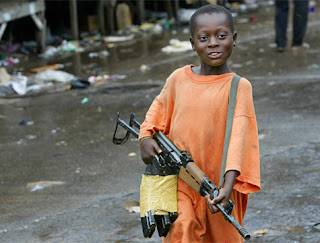 Another case of Third World adoption gone very wrong. An American family with six children decides to adopt three Liberian children from Africa. One of the African children dies, allegedly after being whipped. But one does wonder if these children had health problems before they were adopted, and if the allegations made against this family are at least in part untrue. I do feel sorry for this family, they tried to turn to help these Africans. You can take the savage of jungle, but you can not take the jungle of the savage and turn them into good little children like the one you bore yourself-it is not going to work. I feel sorry for the six children who’s lives have been ruined by the foolishness of their parents taking in these Africans. The media is attacking No Greater Joy Ministry for promoting child training, homeschooling and patriarchy. They are I suppose in one way responsible, but not for reasons they are attacked, this is another case of multiculturalism leading to tragedy, and NGJ is all for multiculturalism and miscegenation. This family did not have any trouble with their own children, but the Africans were uncivilizable. The Liberal media and the Feminists love this story, however the real cause of this tragedy are failed cults of adoption and multiculturalism, not homeschooling or patriarchy.

Kevin Schatz, 46, and Elizabeth Schatz, 42, were booked into Butte County Jail on murder and child abuse charges. Police responded to the 500 block of Crestwood Drive at about 1 a.m. after receiving a report from Elizabeth of a female juvenile who was not breathing. Officers arrived to find the child in full cardiac arrest.

Friends, normally I don’t “name names” on Quivering Daughters. As my FAQ states, I believe for the purposes of this blog it distracts from hurting souls to make it a point to highlight particular teachers and ministries. But my heart is broken today. And sometimes not naming names leads to hurting souls. I have prayed that Michael and Debi Pearl’s ministry No Greater Joy would show compassion upon a little girl who was murdered by those who were devoted followers of their writings.

Note: The Child pictured is Momolu, a Liberian child waiting to be adopted by a nice Christian family in America, his hobbies include shooting at people, starting fires, and looting.