Another Obama indoctrination school
Posted by Faust at 9:25 AM 1 comment:

The Case of Sweden... 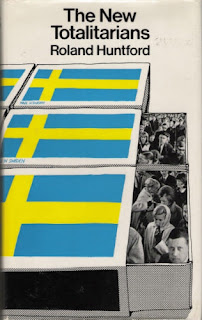 Roland Huntford wrote The New Totalitarians, a very disturbing portrait of contemporary Sweden in 1971. Roland Huntford makes the point that in the "Social Democratic" Swedish political culture totalitarianism, in the sense of complete political control of society, can be brought about by bureaucracy as well as brute force. The Swedish welfare state is the embodiment of the dystopian society Aldous Huxley envisaged in Brave New World. Individual freedom is sacrificed on the altar of social security and fornication is promoted by the state in order to destroy the family and pacify the population-taking the place of rebellion against political authority. In the state run school training in unrestrained sexual conduct begins at an early age; "most of Sweden has been taught to believe that freedom has been achieved through sex." Thus fornication becomes just another agent of control.

...'As political and economic freedom diminishes,' says Hux-
ley, 'sexual freedom tends compensatingly to increase. And
the dictator (unless he needs cannon fodder and families with
which to colonize empty or conquered territories) will do
well to encourage that freedom. In conjunction with the
freedom to daydream under the influence of dope, the movies
and the radio, it will help to reconcile his subjects to the
servitude which is their fate.'

'Freedom' in Swedish is a word that appears to be taboo.
It does not exist in the political vocabulary, and it is rarely
mentioned in everyday language, in spite of the advancing
regimentation of the country. There is one exception, how-
ever, and that is in sexual matters. In the same way that
'security' is the creed of politics, so is 'liberty' that of sex.
The word 'freedom' is almost entirely confined to the
sexual field in Sweden. In every other department of life it
has been replaced by the vocabulary of the collective and of
restraint. Jargon like 'interests of the community', 'oriented
towards society', 'social responsibility', 'socially well
adjusted', and 'inculcation of the correct social attitudes'...

Museum Island
Posted by Faust at 10:45 PM No comments:

Kenyans want Obama come to Africa and rule as king...

"Yankees Pull Plug on Ronan Tynan After... Joke About Jews"

In the Bronx, a Clash of Cultures Turns Violent(Black Africans fight Afro-American)

UK: Stopping "hooliganism is no longer the responsibility of the police"

Mothers are banned from looking after each other's children

African sex-pervert arrested in Yorkshire.
Posted by Faust at 10:24 PM No comments:

Life in the New South Africa...

"But grim prognoses aside. We must also take time to celebrate our educational successes. As much as we bemoan the challenges of transforming the education system, we must also draw out our successes. The single-minded dedication of learners who commit to their studies against daunting odds, for example Krystal Theron from Springs who wrote her matric exam from her hospital after being brutally stabbed. Even a violent rape attack and subsequent HIV infection could not stop Jamie Paterson in Gauteng from sitting-and passing-her matric exam.1

Some people are will to fight back...

The Montana Firearms Freedom Act, also known as Montana House Bill Number 246, was introduced January 13, 2009 by Joel Boniek, Gerald Bennett, Edward Butcher, Aubyn Curtiss, Lee Randall and Wendy Warburton. The bill was signed in to law by Governor Brian Schweitzer on April 15, 2009 and became effective on October 1, 2009. On that effective date, supporters of the law filed suit as a test case in federal district court.

The law exempts firearms made and kept in the state of Montana from United States federal firearms regulations. It also has no requirements for registration, background checks or dealer licensing. It applies to firearms other than machineguns, along with ammunition and accessories such as silencers, provided that these items are manufactured in the state, and do not leave the state...

For Obama to allow "medical marijuana" at the same time the Federal government is cracking down on tobacco, makes little sense. Anything to make Americans more stupid I guess...

I wonder if Obama will tell district attorneys to defer to local gun laws rather than federal law in cases such as Montana's new gun law?

The Justice Department's announcement that the feds will no longer crack down on medical marijuana sellers... The new memo... urges district attorneys to defer to local marijuana laws rather than federal law...